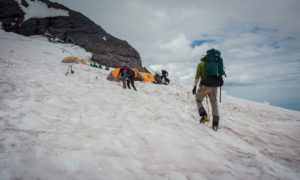 One fall day on Washington’s Mount Rainier, Josh Brandon and a group of fellow active duty platoon leaders discovered something about the outdoors that could improve the lives of veterans.

It was September 2009 and the group had decided to make a late-season summit attempt of Washington’s highest peak as part of a team-building exercise. The platoon leaders, who were all members of the same infantry company, began their climb in the early morning hours. Conditions were windy—a storm was forecast for later that day. About halfway up Disappointment Cleaver, the team paused to collect their bearings and a leader was hit in the neck with a boulder, resulting in a spinal contusion. Drawing on their previous military training, the group treated his injury and evacuated him to safety by nightfall.

“We figured out that mountaineering replicated the best parts of combat,” said Brandon, 41, who is now an Outdoor Research athlete and a graduate student and research program manager at the University of Washington. “A small, tight group. Taking risks. Facing adversity. Out there in nature.”