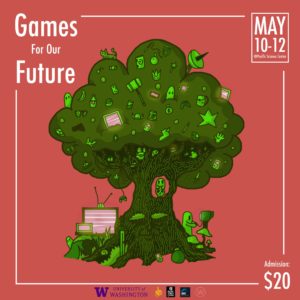 The Second Annual Games for Our Future Game Jam was a success! Presented by EarthLab, Seattle Indies, Seattle Serious and Social Impact Games and Pacific Science Center, the theme was Creating a Green Tomorrow. The Game Jam brought game developers and researchers together for a weekend to learn from each other and show the power of games to translate complex environmental research into a medium that is both fun and educational. 60 developers worked in teams to create over 13 games (11 uploaded). The day kicked off by having nine UW research mentors speak, three on topics about game design and six on topics of climate change and environmental science. Afterwards, teams formed and began creating games.

–> Check out the games our participants developed!

–> Read more about the event on the Seattle Indies blog.

Below are the award winners in each category from the Game Jam:

Climate Utopia: Virtual Reality experience in which you explore a world in the future that is truly sustainable

2 Degrees!: Board game simulating building a city without increasing the global temperature to 2 degrees C

Rising Tides: Game to combat sea level rise by investing in seawalls, moving to a new location, or responding to other disasters

2 Degrees!: Board game simulating building a city without increasing the global temperature to 2 degrees C

Icebears Care: Save polar bears on melting ice caps by stapling icebergs back together

None of this would be possible without the tireless dedication of our mentors: