Fréderique Fardin has been fascinated by the tropical mangrove forests of her home country Martinique for nearly a decade. But she’s never seen this before.

“The water was pink. Bright pink. I would say it was quite beautiful if I wasn’t concerned about the underlying cause,” said Frederique.

Frederique is an associate Ph.D. student with the University of Cambridge and a fellow for The Nippon Foundation: Nereus Program. The Ocean Nexus Program works in concert with Nereus Program researchers to advance our comprehensive understanding of the global human-ocean system across the natural and social sciences.

Earlier this year, many people started reaching out to her top share social media posts of pictures of Martinique mangrove forests with shockingly pink water. Several hypotheses were swirling around and expert opinions were in high demand. As Frederique’s research focuses on the vulnerability and adaptation of mangrove forests to climate change, their associated fisheries, and the people dependent upon them, she was called to action.

Environmental pollution and the connection with human health is especially top of mind to local Martinicans. A pesticide linked to cancer was sprayed on banana crops on the islands for two decades after the chemical was banned worldwide, including in France who sanctioned these sprays. Now, much of the soil, rivers and coastal waters are contaminated and nearly all the adult local residents have traces of it in their blood.

“In Martinique, any sign of pollution has us worried. Looking at the initial pictures, I thought the most plausible reason was an algae bloom, but we didn’t have any specific history of this happening in mangrove forests. I am really concerned about protecting the lives of the people who depend on this fragile ecosystem, so I wanted to find the answer quickly,” she said.

Frederique has reason to be concerned. Despite the great importance of mangroves, a variety of factors such as coastal development, overexploitation, and pollution are endangering this biome. Estimates indicate that a quarter of mangroves have been lost in the past 40 years. Now, climate change is being added to the list of concerns.

“The mangrove forests are essential for local fisheries, and coming from a fishing community, this is especially meaningful to me,” said Frederique. “They also provide a home for a rich assortment of marine and bird biodiversity, and they are important for providing building wood, fuel, and food for the surrounding communities.”

The interlocking root system protects coastal areas from erosion and storm surges and according to NASA, the forests are highly efficient at storing carbon dioxide “in greater quantities than other forests” as a percentage of the land cover.[1]

She and her colleagues were able to take some samples of the water and used a drone to take other photos. Her hypothesis was confirmed: the microalga Dunaliella Salina was indeed present. Although the mere presence of algae isn’t particularly harmful to mangroves, it’s the cause of the algae that has Frederique concerned. 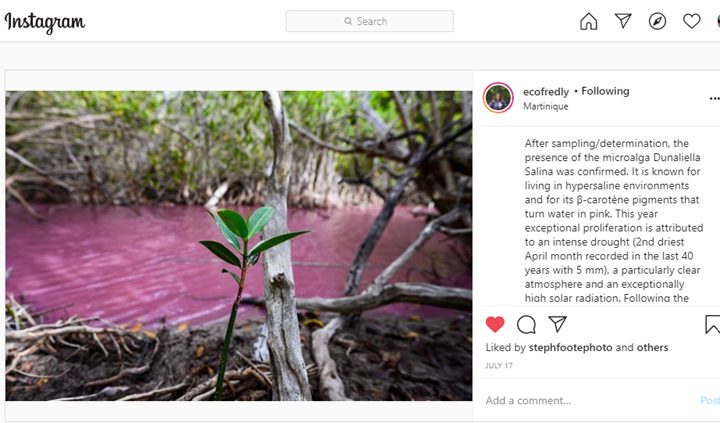 “This year exceptional proliferation is attributed to an intense drought (2nd driest April month recorded in the last 40 years with 5 mm), a particularly clear atmosphere and an exceptionally high solar radiation,” she wrote on Instagram. “Following the past weeks’ rainfall, the ecosystem is going back to normal and the colouring is disappearing. However, under climate change stress, I am tempted to say “until the next episode.””

Frederique recently received news that she was awarded an Early Career Grant by National Geographic, making her a 2020 NatGeo Explorer. This will allow her to extend her PhD research sites to the Caribbean. This is especially meaningful as the COVID-19 pandemic has restricted travel and research in so many areas across the world.

“If the global health situation taught me something, it’s that we need to be constantly creative, positive, and resilient,” she said in a conversation with Nat Geo. “Although it will not be the fieldwork I had imagined, I am very grateful to be able to pursue my research and I am looking forward to learning through this process.”

For those of us who are not part of the research, but are interested in helping these critical ecosystems, she has some advice:

“If living in tropical areas where mangroves are present, an average person can support conservation efforts by participating in them, that includes restoration for example, but also by simply not using them as dumping sites. For the people who have never seen mangroves in real life, I definitely encourage them to share online stories about mangroves and support organisations that work for their conservation. As I like to say, share the mangrove love!“